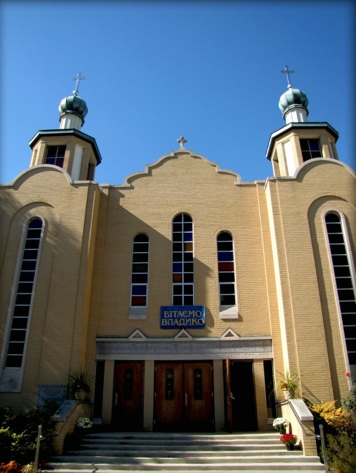 We are extremely pleased that you are visiting our website and are interested in the life of our parish family.
St. Mary the Protectress (Pokrova) Ukrainian Orthodox Cathedral belongs to the Ukrainian Orthodox Church of the USA and is under the omophorion of the Ecumenical Patriarchate.  For over sixty years, our parish has been a gathering place for the Ukrainian Orthodox faithful in the Detroit Metropolitan area.   We deeply appreciate the hard work of the founders of this parish – their legacy is a beautiful place of worship that enjoys a warm family atmosphere.  Our parish has opened its doors and hearts to many generations of Ukrainians –many who have left their homeland to find a better life in the U.S.A. and those born here.   This has also become the spiritual home of many people from various post-Soviet countries. We are very pleased to see the diversity of people worshipping together. St. Paul people said, "There is neither Jew nor Greek, there is neither slave nor free, there is neither male nor female; for you are all one in Christ Jesus." (Galatians 3, 28). We come together for worship services regularly on Saturdays and Sundays and during major holy days. The main language of worship is Ukrainian, but services are also conducted in English and Church Slavonic. Our current Church was built in 1970 and was the result of many generous donations of time and money of the entire Ukrainian Orthodox community. From the very beginning our Church organizations and youth groups worked in close harmony with one another - the Sisterhood of St. Olha, the Cathedral choir, Lesia Ukrainka School of Religious and Ukrainian Education, the Ukrainian Orthodox League and the Organization of Democratic Ukrainian Youth (ODUM).

WE GLADLY WELCOME YOU
TO OUR CHURCH!

Saturday , July 24, 2021 (Julian calendar:
Saturday , July 11, 2021)
Saturday , July 24, 2021 (Julian calendar:
Saturday , July 11, 2021)
Luk. 7:36-50
36 And one of the Pharisees desired him that he would eat with him. And he entered into the Pharisee's house, and sat down to meat.
37 And behold, a woman who was in the city, a sinner; and when she knew that he was sitting at meat in the Pharisee's house, she brought an alabaster cruse of ointment,
38 and standing behind at his feet, weeping, she began to wet his feet with her tears, and wiped them with the hair of her head, and kissed his feet, and anointed them with the ointment.
39 Now when the Pharisee that had bidden him saw it, he spake within himself, saying, This man, if he were a prophet, would have perceived who and what manner of woman this is that toucheth him, that she is a sinner.
40 And Jesus answering said unto him, Simon, I have somewhat to say unto thee. And he saith, Teacher, say on.
41 A certain lender had two debtors: the one owed five hundred shillings, and the other fifty.
42 When they had not [wherewith] to pay, he forgave them both. Which of them therefore will love him most?
43 Simon answered and said, He, I suppose, to whom he forgave the most. And he said unto him, Thou hast rightly judged.
44 And turning to the woman, he said unto Simon, Seest thou this woman? I entered into thy house, thou gavest me no water for my feet: but she hath wetted my feet with her tears, and wiped them with her hair.
45 Thou gavest me no kiss: but she, since the time I came in, hath not ceased to kiss my feet.
46 My head with oil thou didst not anoint: but she hath anointed my feet with ointment.
47 Wherefore I say unto thee, Her sins, which are many, are forgiven; for she loved much: but to whom little is forgiven, [the same] loveth little.
48 And he said unto her, Thy sins are forgiven.
49 And they that sat at meat with him began to say within themselves, Who is this that even forgiveth sins?
50 And he said unto the woman, Thy faith hath saved thee; go in peace.